A summer school at Cambridge University for students who live in areas of low participation in Higher Education.

Each year Christ’s College, Cambridge works in collaboration with Sidney Sussex and Murray Edwards Colleges to run an August summer school for Year 11 students who live in areas of low participation to higher education (LPN).

The LPN Summer School is designed to encourage academically able students from areas of the country where students are less likely to enter higher education to consider making applications to top universities, including the University of Cambridge.

It is also important to note that this programme consists of visits in both the summers of Year 11 and Year 12 – however, the Year 12 leg is only open to those who have been part of the programme from Year 11. Therefore, we strongly encourage any eligible students to make an application, as they will receive support and guidance for their studies and university in the summer and beyond, whichever form that may need to take.

The programme includes a variety of masterclasses given by Cambridge University researchers, an opportunity to get to know Cambridge, information about making an application to Cambridge, and a chance to meet current Cambridge students.

Applications for the 2020 summer school are now open, and will close on Thursday 28th May.

For more information about the summer school, the eligibility criteria, and to make an application, visit the college’s website:

As part of the summer school programme, students have the opportunity to attend a series of seminars that will introduce them to the study of a particular subject at university level.

This year (2020), the following subject strands will be available:

family (i.e. you no longer have contact with your parents and may be living with another family member).

As this event is still some months away, we are currently planning to run it as a residential event in Cambridge if the situation regarding Covid-19 allows. In the eventuality that we are unable to run this event in-person, we will provide an online alternative for those who are selected to attend on the same dates. The application form asks students to indicate the feasibility of attending both in-person and online versions of the programme, and participants will be notified of any changes as far in advance as possible. 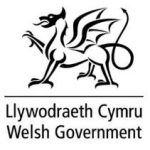 During this period of uncertainty, it remains important to maintain good nutrition and hydration. It’s recommended that children are provided with three regular well-balanced meals per day and appropriate snacks in between. Regular meals can help provide structure to new daily routines. In response to the coronavirus pandemic, the Welsh Government has made funding available to your local authority for the provision of food vouchers or payments in place of free school meals. The Welsh Local Government Association is assisting partnership working and providing support. Your food vouchers or payments should be spent on food for your children. In practice, your food vouchers or payments will supplement your family’s budget for food shopping. Food shops include supermarkets and convenience stores but not takeaways. This leaflet provides useful tips on planning, shopping and preparing food for your family, along with a list of useful ingredients.

See the leaflet for more details and tips:   WLGA Leaflet for Schools

Zoom, Whatsapp, Phone, Text and Email. Youth workers from INFO can support you in many ways. 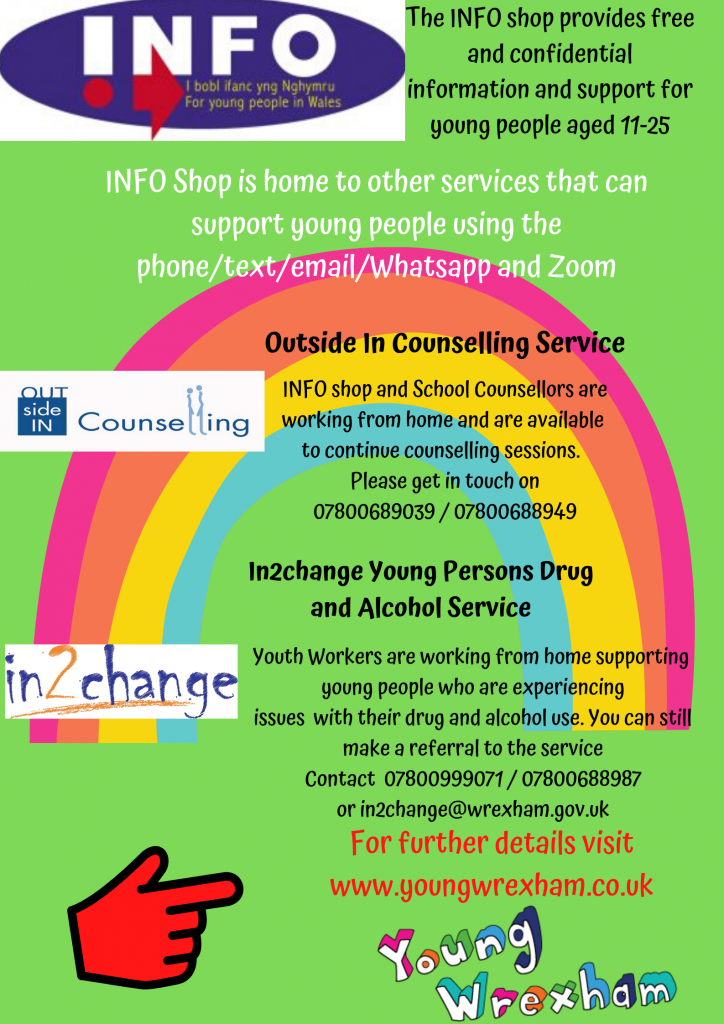 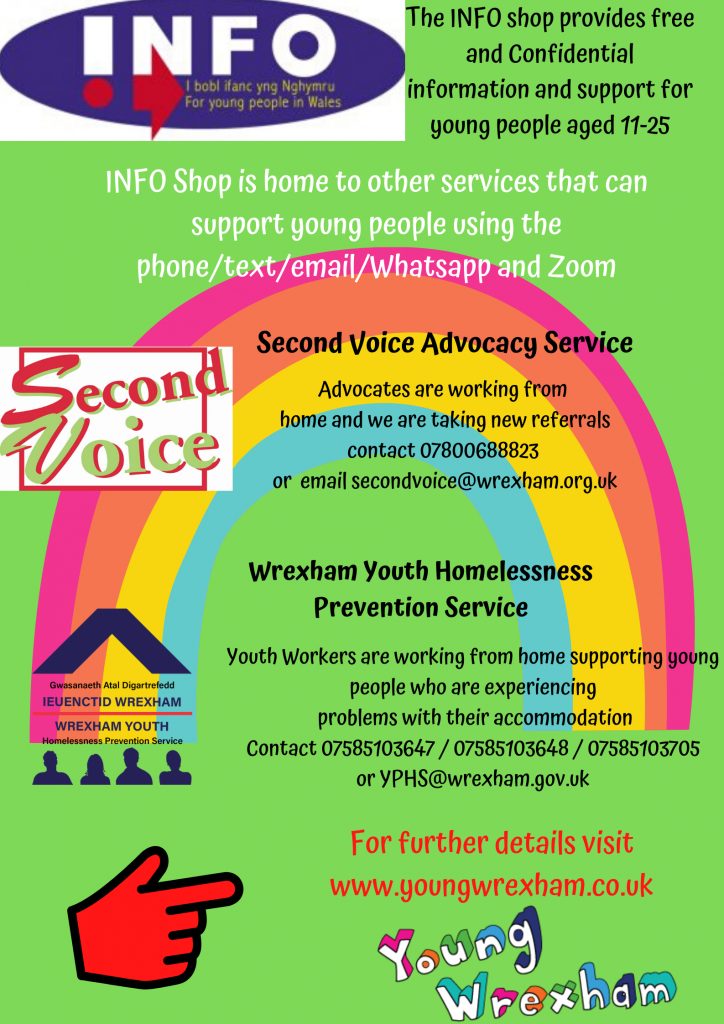 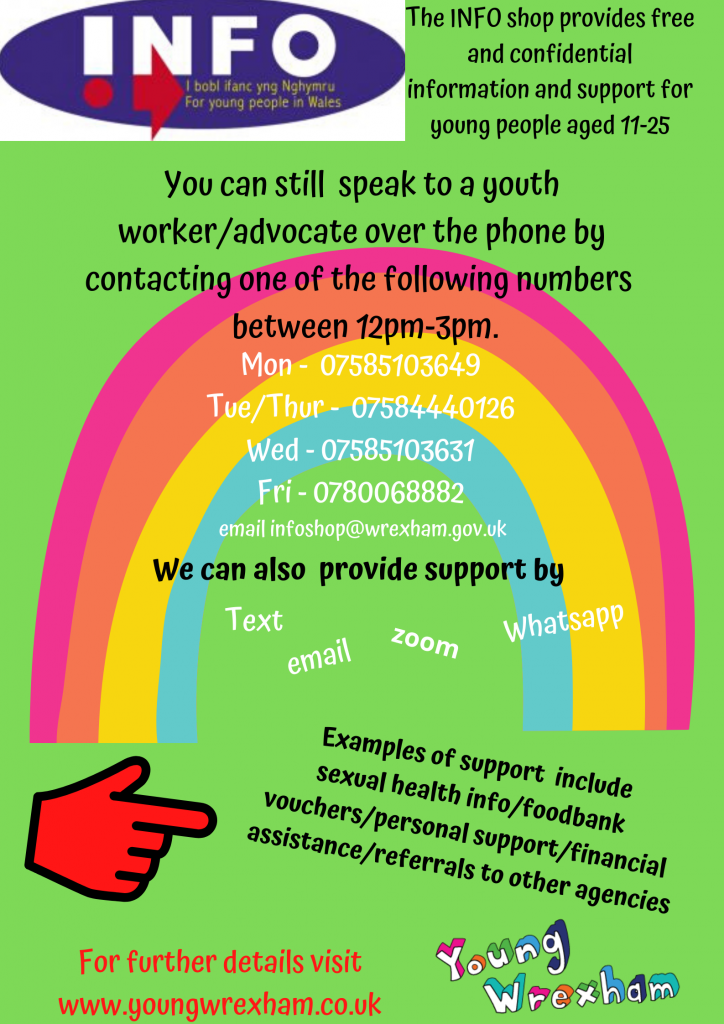 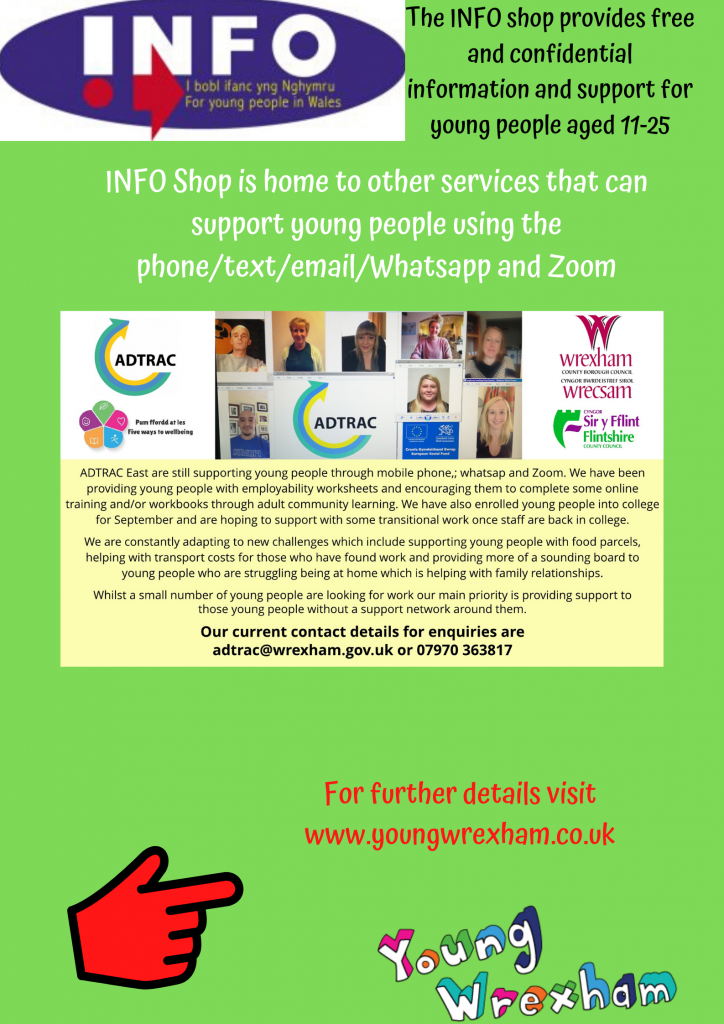 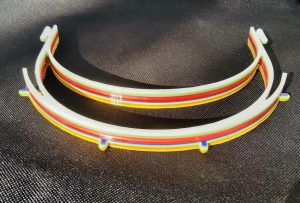 Following on from an announcement from Betsi Cadwaldr UHB that certified PPE is available in numbers for their staff to use.  Volunteers who linked with local schools, including Ysgol Clywedog, are being celebrated for their role at the forefront of the local PPE effort; producing protective face-visors for staff in hospital and care settings in Wrexham, using 3D printers and laser-bed cutting technology.

Dr Graham Sparey-Taylor and Cllr Phil Wynn established a 3D Printing Hwb at Ysgol Clywedog in early April and saw the project grow rapidly.   Matt Vickery, Head teacher at Ysgol Clywedog provided the school’s IT suite to use as a base and AVOW brought governance and a fundraising platform.  With an enthusiastic local response from members of the community, Hwb Wrecsam quickly expanded from a handful of volunteers to over thirty, with local organisations, small businesses, community groups and individuals donating material and machines, meaning that the Hwb was able to provide even greater numbers of protective visors for use by Health-workers, including ICU staff at the Maelor Hospital nursing COVID19 patients.

Cllr Phil Wynn whose idea it was to use Ysgol Clywedog as a base said “At the outset of the pandemic it was distressing to read that NHS staff up and down the UK were having to use bin bags for PPE, so it has been a proud moment for me to be part of the nation’s movement of schools and 3D printers (many of whom were also home-based) who rallied to the need for home produced visors in the absence of a certified supply.

We wanted to ensure we were supplying face-visors which met BCUHB’s requirements, so we are indebted to the guidance provided by M-Sparc and Awyr Las.   It was also a pleasure to work with a great group of volunteers who answered AVOW’s call for support. Without their commitment we could never have achieved our part in this national effort”.

Matt Vickery, the Head at Ysgol Clywedog, stated “I’m immensely proud of my staff Jo Brown and Nick Clarke for their commitment to producing face-visors to meet local demand, using the school’s laser-bed cutting machine. I know many of Wrexham’s Secondary school’s Design & Technology staff have been doing exactly the same so a big thank-you is owed to staff at Ysgol Morgan Llwyd , Rhosnesni High, The Maelor, Ysgol Rhiwabon High and St Joseph’s.

It just seemed the right thing to do to allow Hwb Wrecsam to be based at the school. It was nice to hear how many of the volunteers were previously educated at Ysgol Clywedog or for many Bryn Offa as it was in their day”.

This community response to the Covid-19 crisis inspired the generosity of the people of Wrexham who donated via the AVOW fundraising page, to fund the project.   As this schools-based phase of the project closes, a number of 3D-printing machines that have been bought will be donated to schools locally later in the year and a donation made to Awyr Las, the NHS charity helping people across North Wales.

John Gallanders, CEO of AVOW stated “ In all the years I have been involved in the Volunteer Sector I have never known a time when so many individuals of all ages have stepped forward to offer their time and skills to help the most vulnerable members of our society.  It has been an honour for AVOW to have supported the Hwb Wrecsam project.  The time has come for British Industry to step in and produce certified PPE for our front-line NHS and care setting staff”.

Dr Graham Sparey-Taylor, a lecturer at the University of Wolverhampton, whose idea it was to create a 3D Print Hwb, with his two young sons, describes the project now as going “into a new phase” – continuing to produce PPE / protective visors at a new site in the Wrecsam area.    With the Covid-19 crisis ongoing, and workers cautiously looking to lockdown being lifted, volunteers have set up Hwb Wrecsam as a Community Interest Company and will continue to fundraise to produce as many protective visors as possible.

He added “As we move forward, our heartfelt thanks go to Matt Vickery, Head of Ysgol Clywedog who supported us and without whom, we simply could not have produced so many visors.  We sincerely thank Cllr Phil Wynn, Chair of Governors at the school and the teaching staff who allowed us to use their IT suite as our base over the past few weeks.

We’ve seen so much kindness and commitment in Wrecsam’s recent PPE effort, from dedicated teaching staff working on laser-bed printers in schools, to people producing protective visors on their 3D printers at home.   Without the support of our schools and universities and the outpouring of generosity from skilled volunteers and the Wrecsam community; we would not been able to help so many people.  As we move to our new site to continue producing PPE for frontline, key-workers and community workers, during this Covid-19 crisis, we need this support more than ever.”