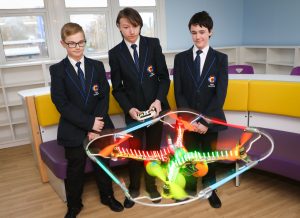 Ysgol Clywedog is celebrating the double success of four young students in a national aeronautical competition.

The year 9 students, Leo Sowter, Jamie Sides, Tyler Rush and Leo Wright, entered Ratheon’s Quadcopter Challenge and won the regional heat, securing them a place in the national final at RAF Cosford where they came first in Wales and fifth in the UK.

Their challenge was to build a working quadcopter from a kit supplied by Raytheon which could be adapted and modified to fit a brief.  The theme for 2019, “Technology Around the World,” was chosen to highlight the importance of global collaboration for building technology and sharing ideas.

The teams were judged on their presentation, the craft’s modifications and the flight performance through four obstacle courses

In preparation for the regional heat and the final, the team worked in conjunction with Raytheon STEM ambassadors, Josh Gallagher and Alan Jones, and gained first-hand experience of design, project management, presentations, engineering techniques and aerodynamics.

Meeting at least once a week after school, as well as during lunchtimes and break times, the students also practised at home on the simulator and contributed to the presentation together using Google Slides in their own time.

At the final, as well as the prestige of being part of the event, the team came away with baseball caps, water bottles, competitor’s medals, event lanyards and, for the school, a certificate.

This is the third year that teams from Ysgol Clywedog have competed in the competition, achieving third place at the regional heat in 2017, and second place in 2018.

The science department has supported the teams over the years and is thrilled with the success of the 2019 finalists.   “These four young men have worked incredibly hard for this achievement. Jamie practised controlling a quadcopter on the simulator over the summer. Leo Sowter has been involved with the STEM club since he started in year 7, in 2017.  He’s a fantastically interested and enthusiastic participant!

“Leo Wright and Tyler were the quadcopter equivalent of our pit crew and were responsible for getting the quadcopter going again in the shortest time possible, replacing propellers, guides and guards in seconds.

“They all worked brilliantly as a team and understood how to get the best from one another.  They are overjoyed at their final place in the competition and are aware that they have lifted the bar for next year’s team.

“Overall, I hope that this sparks consideration of, or interest in, the field of engineering, which is of tremendous importance to the local economy.  The prospects for engineers going forward is almost without limit and it’s something that I believe we should be encouraging at every opportunity.”

The Mayor of Wrexham, Cllr Rob Walsh, said: “Everyone should be very proud of themselves. To take part in the final of such a prestigious competition is a huge achievement and the results show just how much emerging engineering talent there is in Wrexham. I will be meeting all those involved in December and can’t wait to hear about the competition and the young people’s aspirations for their future careers.”

Outstanding effort from our Year 7 students at the Wales Climate and Nature Youth Festival. There will be more opportunities for the school to get involved with from September.
@Keep_Wales_Tidy @YDB_Official

In less than 3 weeks a group of Ysgol Clywedog pupils will be heading over to Tanzania for a 4 week expedition to work with local communities. They are doing a last push fund raiser and you could WIN £100!

Come and join our team. Please click the link below to view our latest job vacancies :
http://clywedog.org/vacancies/