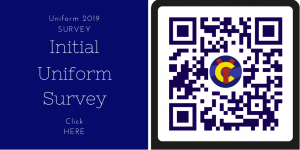 The Governing Body have recently approved proposals to undertake a review of the current school uniform. After a Student Council meeting it has been agreed to conduct an initial feedback survey comprising of questions from students, staff and parents.

For some time, many concerns have been raised by a range of stakeholders regarding the current school uniform that has culminated in this decision to undertake a review.

The key issues raised in various conversations and forums are as follows:

General feedback from staff, governors, parents and students indicates a clear desire to retain the traditional blue colour scheme, however:

On the basis of this initial discussions we have published an initial survey for students, parents, staff and governors. We hope to ascertain the initial views of all stakeholders in order that they are active participants in deciding if there is a need to change, and if so, in shaping the uniform of the future.  The survey will be sent via Twitter, Facebook and Instagram. The link to the survey is also at the top of this page.

When we have this feedback we will put forward proposals for September 2019. We also recognise that the views of parents are critical, and to this end we will be holding parental events in the spring term.