Ysgol Clywedog win a place the MockCOP Final in Cardiff.

Ysgol Clywedog win a place the MockCOP Final in Cardiff. 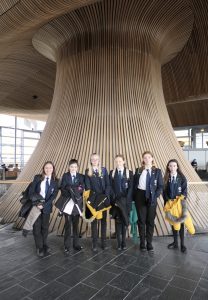 Ysgol Clywedog students recently won a place at the prestigious MockCOP Final in Cardiff.  They spent two days as guests of Size of Wales taking part in climate change discussions, workshops and debates with influential senior figures and politicians leading the way in climate change action.

Day one was spent at the Senedd, starting with a tour and the chance to watch a plenary session of AM’s before a full afternoon of carousel sessions on “Tackling climate change and making change in the world”. Sessions were led by Robert Bailey from the Welsh Government Decarbonisation Team, Beth Irving, a climate activist,  Robert Proctor, Business and Development Manager for Community Energy Wales, Ann MacGarry who has been running Climate Change workshops for over 30 years at the Centre for Alternative Technology and Mari Wyn Gooberman Education and Youth Engagement Manager National Assembly for Wales.

Day two started with an early breakfast and a trip to Ty Hywel in the Bay for a full day of MockCop debate and discussion. Delegates from Ysgol Clywedog and schools all across Wales were warmly welcomed by Eluned Morgan, Minister for International Relations and Welsh Language. Following Chile’s Opening Speech, resolutions and Statements of Position followed.  Passionate and sometimes heated, floor debate and negotiations took place for several hours.  The students from Ysgol Clywedog year 8and 9 team had done their research and were actively involved in all aspects of negotiations with a range of year 8 to year 13 students.  A lunchtime vote saw amendments made to the resolution.

After a short lunch break an afternoon session on “The change we want to see in Wales” attended by AM’s and sponsors, the Scottish Power Foundation, saw students put forward their ideas for reducing CO2 and reducing waste.

MockCOP is a fantastic opportunity that enables young people to engage interactively with the complexities of tackling climate change. As well as aligning with the new curriculum in developing ethically informed citizens, it promotes global citizenship and contributes towards a number of UN Sustainable Development Goals including quality education, reduced inequalities and climate action.
The students did a fantastic job of representing their allocated countries. We saw alliances forming between low lying island states, and tensions between high and low income states grow as they negotiated, trying to agree resolutions and ways forward in the global effort to address climate change and keep global temperatures below a 1.5⁰C increase. It was clear that each team had really done their research and understood the complexities and dynamics of the negotiations.
Well done to all who attended.

Check out the Size of Wales Twitter @sizeofwales  and Facebook page https://www.facebook.com/sizeofwales for more info, photographs and video clips of the event.

Outstanding effort from our Year 7 students at the Wales Climate and Nature Youth Festival. There will be more opportunities for the school to get involved with from September.
@Keep_Wales_Tidy @YDB_Official

In less than 3 weeks a group of Ysgol Clywedog pupils will be heading over to Tanzania for a 4 week expedition to work with local communities. They are doing a last push fund raiser and you could WIN £100!

Come and join our team. Please click the link below to view our latest job vacancies :
http://clywedog.org/vacancies/